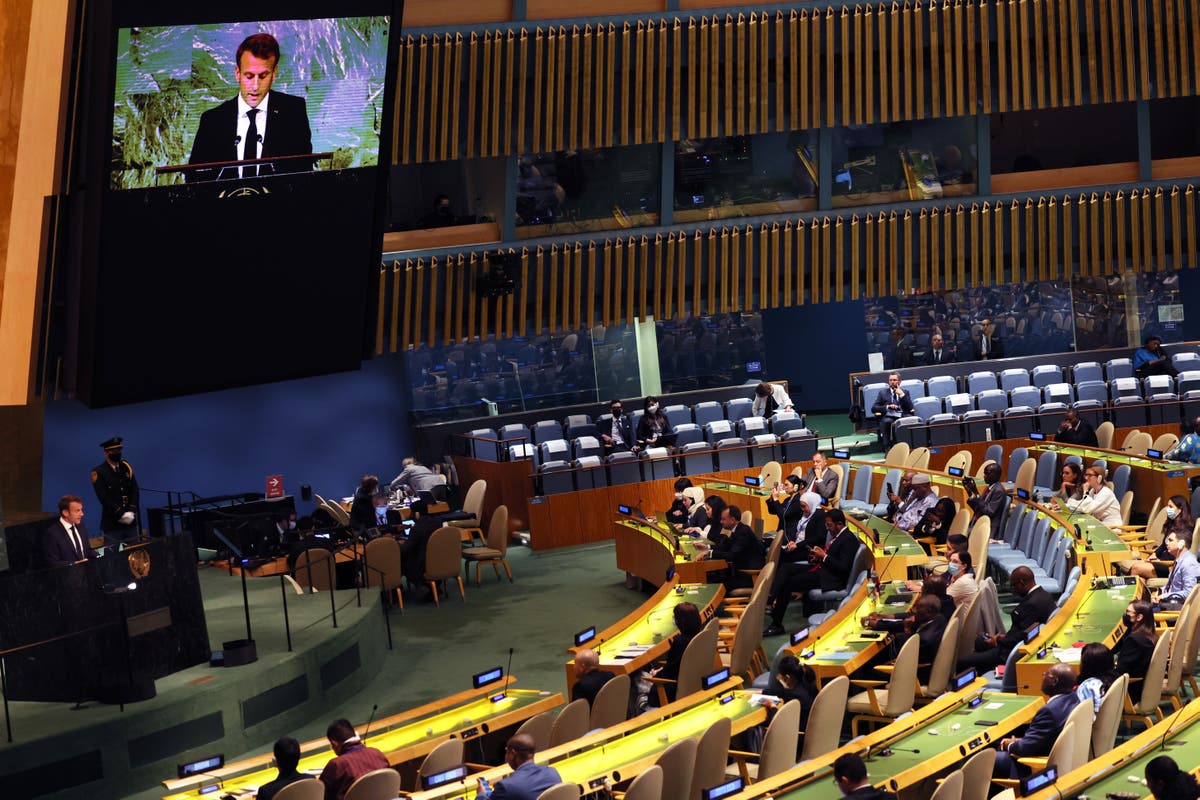 Joe Biden condemned Russia for “open nuclear threats to Europe” in an address to the United Nations General Assembly on Wednesday.

Biden condemned Russia’s “brutal, unnecessary war” against Ukraine, as he announced support for countries affected by food shortages as a result of the invasion.

Mr Biden’s speech comes a day after Russian President Vladimir Putin announced the partial mobilization of 300,000 reservists as his forces struggle to regain their footing after a series of Ukrainian battlefield victories.

Russia’s war in Ukraine dominated the first day of the United Nations General Assembly (UNGA) as world leaders gathered in person for a summit after three years in New York.

UN Secretary-General Antonio Guterres said the 77th meeting is taking place at a time when the world is in “great danger” and “paralyzed” by war, climate chaos, hatred, poverty and inequality. World leaders condemned Russia’s invasion.

Biden says Russia has made “open nuclear threats” to Europe

In his address to the UN General Assembly, Joe Biden accused Russia of “open nuclear threats to Europe”.

Biden’s comments come a day after Russian President Vladimir Putin threatened a nuclear response to his military failures in Ukraine.

“President Putin has made open nuclear threats to Europe and a reckless disregard for nonproliferation regime responsibilities,” Biden said.

He added that Russia “shamelessly violated the basic principles of the Charter of the United Nations.”

A day earlier, Putin said in a nationally televised address: “Russia will use all the instruments at its disposal to counter threats to its territorial integrity – this is not a bluff.”

Biden said that Russia “attempted to wipe a sovereign state off the map” and “shamelessly violated the basic principles of the United Nations Charter.”

Biden’s remarks came a day after Russian President Vladimir Putin announced a partial mobilization of 300,000 troops to bolster his forces, which have been withdrawn by the Ukrainian military in recent weeks.

“This war is about extinguishing Ukraine’s right to exist as a state,” Biden added.

Biden will announce $2.9 billion in food aid at the United Nations General Assembly

Joe Biden will use his speech at the UN General Assembly to announce $2.9 billion in global food security aid to address shortages caused by Russia’s invasion of Ukraine and climate change.

“This new $2.9 billion announcement will save lives through emergency interventions and invest in medium- and long-term food security assistance to protect the world’s most vulnerable populations from an escalating global food security crisis,” the White House said.

About $2 billion in funds will go to direct humanitarian aid through the United States Agency for International Development.

Iran says it does not want nuclear weapons

Iranian President Ebrahim Raisi has said his country does not want nuclear weapons and wants to revive a deal with the West on its nuclear program, but cast doubt on Washington’s commitment to the deal.

“The Islamic Republic of Iran is not seeking to build or acquire nuclear weapons, and such weapons have no place in our doctrine,” Raisi said.

Former US President Donald Trump abandoned the comprehensive nuclear deal brokered by the US, under Barack Obama, and European powers.

“America trampled on the nuclear agreement,” said Raisi, who was sworn in as president a year ago.

“Our desire is only one thing: honoring commitments,” Raisi said, before asking whether Iran could “truly believe without guarantees and assurances” that the US would not do the same again.

European and US officials have been locked in talks with Iran to revive the deal, but progress has stalled recently.

Israel’s ambassador to the United Nations walked out of the General Assembly hall as Iranian President Ebrahim Raisi began his speech on Wednesday.

Ambassador Gilad Erdan held up a photo of his grandmothers, Holocaust survivors who spent time in Auschwitz, and other family members who were killed.

In an interview ahead of the general assembly, Mr. Raisi cast doubt on the Holocaust, as many other Iranian leaders have done in the past.

“There are some signs that this has happened. If so, they should allow it to be investigated and investigated,” he said CBS News.

Raisi attacked Trump for authorizing the assassination of Iranian General Qasem Soleimani, whom he described as “a man seeking freedom who became a martyr,” while holding up a photo of the late Quds Force commander.

Without mentioning Trump by name, Raisi said that “the previous president of the United States of America was able to sign a document on this savage crime, illegal crime and immoral crime.”

“The proper pursuit of justice in the face of a crime to which the American president has admitted putting his signature will not be abandoned. We will continue through a fair court, to bring to justice those who killed our beloved General Qasem Suleimani,” he added.

“America trampled on the nuclear agreement,” said Raisi, who was sworn in as president a year ago.

Mr Raisi’s speech comes as protests have erupted across Iran in recent days over the death of a 22-year-old woman who was arrested by the country’s morality police for allegedly violating the Islamic Republic’s religious dress code.

The police and security services violently suppressed those protests.

The Himalayan region of Kashmir is at the center of a decades-long dispute between India and Pakistan, with both countries claiming the region as their own but controlling only parts of it.

Erdogan, a close ally of Pakistan, said he hoped for “lasting peace” in the region.

“India and Pakistan, after establishing their sovereignty and independence 75 years ago, still have not established peace and solidarity among themselves,” he said.

“This is very sad. We hope and pray that just and lasting peace and prosperity will be established in Kashmir.”

Liz Truss will meet with Biden and Macron in New York

Liz Truss will meet Joe Biden and Emmanuel Macron in New York amid tensions over Brexit and questions over whether she considers the French leader “friend or foe”.

On her first foreign trip as Prime Minister, Mrs Truss flew overnight to the US for the annual UN General Assembly.

The visit will include a series of meetings, including with the EU’s Ursula von der Leyen, and a speech to world leaders. It comes as political action resumes after a period of national mourning for the Queen.

They will meet against a backdrop of Brexit tensions over Northern Ireland, with the Prime Minister not saying whether the French leader is ‘friend or foe’

“He arrived in New York a few hours ago to tell the world the story of Pakistan, a story of deep anguish and pain arising from the enormous human tragedy caused by the floods,” he tweeted yesterday.

“In my address to the UN General Assembly and bilateral meetings, I will present Pakistan’s case on issues that require the world’s urgent attention.”

Sharif is expected to hold bilateral talks with several world leaders and attend a reception for UN Secretary-General Antonio Guterres.

Although no bilateral meeting with US President Joe Biden has been scheduled, Sharif will reportedly talk to him informally during the reception.

According to reports, his visit was delayed until the last minute due to problems with the logistics of obtaining American visas.

It is expected that they will hold almost 20 meetings on the sidelines of the session. Mr. Lavrov will address the gathering on Saturday.