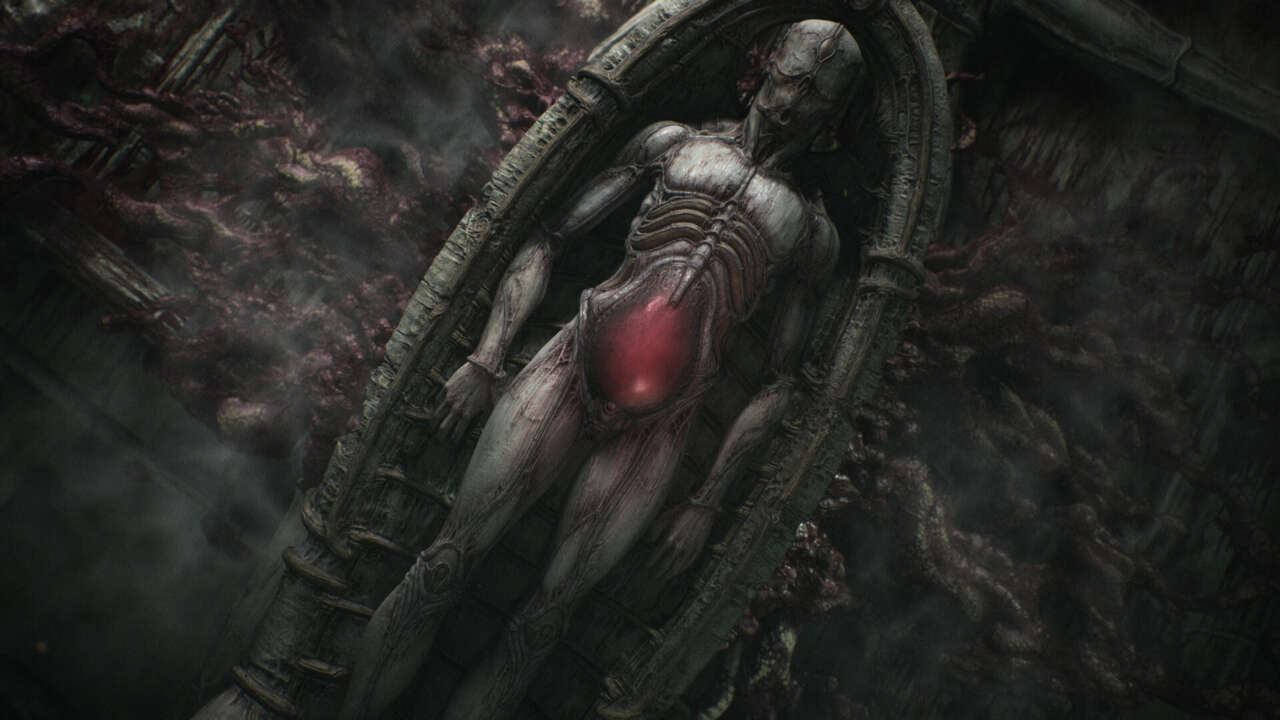 The whole point of Scorn seems to be to disgust, unnerve and disturb the player with its terrifying images of fleshy corridors and disturbing biomechanical monstrosities. And by that measure, the game seems to be very successful – this is a game that I and my normally pretty strong gag reflex struggled to look at from the earliest trailer. It’s a hideous looking game that delights in its rawness.

Developer Ebb Software says it drew on the work of Swiss artist HR Giger and Polish painter, photographer and sculptor Zdzisław Beksiński when constructing its part corporeal, part machine world – injecting Giger’s biomechanical art style into Beksinski’s dystopian surrealism. Composers Billain Aethek and Brian Williams created Scorn’s soundtrack, which is really the only thing you’ll hear during its run, as Scorn has no dialogue to (not) speak. Instead, the entire narrative is told through the game’s environment.

In Scorn, you play as an unnamed person who has become isolated in an unsettling place where viscous-looking living tissue and twisted mechanical devices are joined together in an unlikely relationship that seems symbiotic in nature. There are some first-person shooter moments and horror elements in Scorn, but the game is more focused on puzzle solving and exploration rather than action or scares.

Scorn has an incredible visual style – this game has been instantly recognizable to me since its original discovery in 2014. The not-quite-alive, but definitely not-dead nature of everything curates that eerie feeling that the protagonist is never truly alone. Even the walls themselves give the impression that they may be watching you, leading you to something creepy and scary. Contempt looks and sounds like my favorite kind of horror game: an experience that will genuinely unnerve you, rather than trying to scare you with frequent jump scares. The sick part of my brain that loves games like this can’t get enough of how Scorn looks and sounds.

The lack of dialogue further supports the unnerving sensation of Scorn’s imagery, but seems to go a long way toward Ebb Software’s goal of making the game an experience built with discovery and exploration in mind. There doesn’t seem to be anyone or anything in Scorn that can tell you what to do or give you a detailed explanation of what’s going on – there’s very little in the way of any kind of guidance. There’s not much to the narrative setting either, so you don’t really understand where you are or what you’re supposed to be doing. You have to discover it yourself, looking for a way forward by finding solutions to the puzzles.

I assume the goal in Scorn is to escape wherever you are – whether it’s hell, an alien planet, some terrifying vision, or something else entirely – but I honestly can’t tell you if that’s the case. The game gives you nothing, relying on your blind curiosity to encourage you forward.

This is not an entirely new concept. Of the software Soulsborne games are perhaps some of the most famous examples of games that show a lot and hardly ever tell, tasking players to spend dozens of hours piecing together what happened before the story began and how it relates to what you should do next. And there are plenty of other examples where the narrative thread is hard to discern—especially early on in the story—such as Hollow Knight, Inside, and The Legend of Zelda: Breath of the Wild.

Contempt, however, is perhaps too opaque in its storytelling and level design. It’s definitely too early to say for sure. GameSpot was only shown the early part of the game for this review, so there’s a good chance that Scorn’s plot and what you’re supposed to do to beat the game will become much more coherent later on (since that’s the case with a lot of games with vague narratives, I guess that it is correct here). Regardless, it’s too unfair to judge an entire game based on the opening minutes, so I won’t do it.

But I can criticize what I saw, and it was mostly a game where I’m confused about what the player is aiming for. And my big problem with that is that it doesn’t really convince me that I want to see more. Maybe I’m just missing a hidden detail or two, but I don’t get any sense that Scorn has a story beyond being lost in a disturbing world. Ideally, I want a little more, like a mystery to solve or the threat of defeat or having to learn. And, of course, contempt could include any or all of those narrative threads, but the game doesn’t even seem to hint at any of them from the get-go.

Instead, Scorn feels like a showcase for the truly disturbing world that Ebb Software has created. And while that world is intriguing and looks interesting enough to explore for a while, I’m not convinced that such a surface level of curiosity can pull me in for an entire game. There could be something really cool about Scorn, and I hope there is, but if it is, Ebb Software has done such a good job of hiding it, the studio has actually kept me from getting invested in the game. As amazing as the visuals and audio for Scorn are, they just aren’t enough for me right now. I want a little more narrative meat on these disgusting bones.

Scorn is set to launch for Xbox Series X|S and PC on October 21st. The game will also launch on day one on Xbox Game Pass.