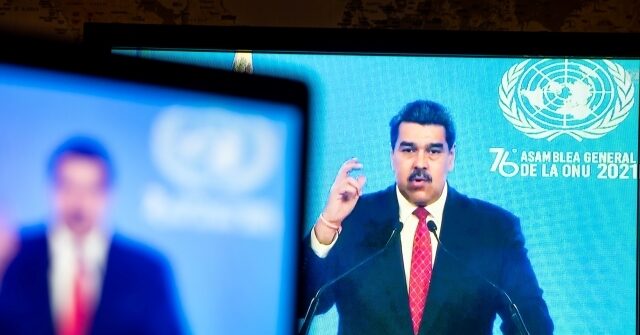 The United Nations’ independent international fact-finding mission on the Bolivian Republic of Venezuela (FFMV) released a report on Tuesday detailing how the socialist regime of Nicolás Maduro — currently based at the UN Human Rights Council — used its intelligence and military data of the agency for the commission of crimes against humanity.

New report — the third published by the Independent Fact-Finding Mission since it was established in 2019 — describes how Maduro orchestrated and carried out plans with other senior regime officials to suppress opposition to their rule, including the use of extreme acts of torture, sexual violence and other cruel, inhumane and humiliating actions.

The United Nations has a long record of confirming human rights and other crimes by member states and then taking no action, including not revoking privileges such as seats on select agencies such as the Human Rights Council. UN experts have already accused Maduro of crimes against humanity when they allowed the Maduro regime to sit in the Council last year.

Maduro has retained the post despite not having been the legal president of Venezuela since 2019 when the country’s National Assembly used its constitutional powers to swear in the legitimate – but powerless – president Juan Guaidó.

The latest report, released on the first day of a high-level debate at the UN General Assembly, did not change the status of the Maduro regime in the organization. Venezuela and beyond maintains his position in the Human Rights Council for the mandate period 2020-2022. A delegation of the Maduro regime will participate in the General Assembly in favor of Guaidó’s representatives.

As the Maduro regime never allowed the Fact-Finding Mission to enter Venezuela, it based its findings and accusations on confidential reports of 246 interviews with victims, their families and former members of Maduro’s security and intelligence agencies.

The report focuses on the actions of two components of Maduro’s intelligence apparatus: the Bolivarian National Intelligence Service (SEBIN) — which the report says “aims to identify political dissidents and human rights activists, as well as other men and women considered that as opposed to the Government; and the Directorate General for Military Counterintelligence (DGCIM), which “targets military personnel and associated civilians allegedly involved in insurgencies or coup attempts”.

U press edition of September 20, Marta Valiñas, chairperson of the Fact-Finding Mission, stated: “our investigations and analyzes show that the Venezuelan state relies on the intelligence services and its agents to suppress dissent in the country.”

“At the same time, serious crimes and violations of human rights are committed, including acts of torture and sexual violence,” Valiñas asserted. “This practice must stop immediately, and the individuals responsible must be investigated and prosecuted in accordance with the law.”

The fact-finding mission found that the Maduro regime’s DGCIM and SEBIN have been extensively using sexual and gender-based violence to torture and humiliate citizens since at least 2014.

There were also cases of detainees who were subjected to short-term forced disappearances and cases of citizens being beaten with blunt and sharp objects, as well as torture with electric shocks, stressful positions, suffocation, cuts, mutilations, threats of death and forced feeding of feces and vomit.

“Intelligence organizations subjected dissidents, both men and women, to sexual violence, including rape with body parts or objects and threats to rape the detained person or his relatives, forced nudity, as well as beatings and electric shocks. genitals. These acts of sexual violence also constitute torture or cruel, inhuman or degrading treatment.” he said Francisco Cox, one of the members of the Mission.

“The country has suffered a decade of growing humanitarian, social, economic and human rights crises, along with the breakdown of state institutions, all exacerbated by the influence of [Chinese coronavirus]”, the report states. “The cruel proof of that is the more than six million people who felt forced to leave the country.”

The fact-finding mission recommended to the international community that “States consider initiating legal proceedings against individuals responsible for the violations and crimes identified in this report, in accordance with their relevant domestic legislation.”

The United Nations Human Rights Council is scheduled discuss the findings of the Independent Fact-Finding Mission on September 26 as part of the agenda of its 51st session.

Maduro himself is not attending the General Assembly this week, it is expected that a representative of his regime will address the prestigious platform.

Christian K. Caruzo is a Venezuelan writer documenting life under socialism. You can follow him on Twitter here.